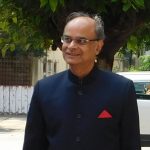 After the demise of erstwhile Chairman Late Admiral R.H. Tahiliani, Former Chief of the Naval Staff & Former Governor of Sikkim, Shri S. Regunathan, IAS (Retd), Former Chief Secretary-Govt. of NCT of Delhi has taken over as the Chairman-School Managing Committee of Balvantray Mehta Vidya Bhawan Anguridevi Shersingh Memorial Academy. Mr. S. Regunathan is a 1968 batch IAS officer, was the Chief Secretary of Delhi in 2004 along with additional charge of Principal Secretary (Power). He has served the Delhi Government in various capacities and was the Principal Secretary to the Chief Minister, Sheila Dikshit, in addition to being the Principal Secretary (Information Technology). During Mr. Regunathan’s tenure Delhi Government made great strides in the field of IT leading to a major computerization drive including making nearly 15 public dealing departments online. He was also the brain behind the formulation of the IT policy unveiled by the Government to make Delhi a cyber city. Considered an officer of high integrity and efficiency, Mr. Regunathan was also the main force behind the successful implementation of the Bhagidari Scheme of the Delhi Government and has been a strong advocate of transparency and openness in functioning of the administration. He understood the mindset of the Chief Minister of Delhi and was able to take forward the vision and idea of making Delhi a world-class city.

GROUP CAPTAIN (RETD) S. C. BAHRI, is an excellent academician, educationist and administrator. Born on 11 November, 1940 at Sargodha (now in Pakistan), he shifted to India with his family during partition and settled in Sri Ganganagar, Rajasthan. He is M.A.(English) and M.Ed. from Ajmer University. In 1965 he joined the Air Force and served in various capacities for about 35 years. He played a key role in setting up 4 schools in Delhi, which are – Air Force Bal Bharti, Lodhi Colony, Air Force School, Air Force Golden Jubilee Institute, Subroto Park and Balvantray Mehta Vidya Bhawan Anguridevi Shersingh Memorial Academy, G.K. – II, New Delhi.
He worked in the Air Force Intelligence and worked as Staff Officer at command HQs and Air HQ. During his service tenure he was awarded commendation from the Chief of Air Staff twice for his outstanding dedication and devotion. He is the only Education Officer to receive awards twice for raising schools in Air Force. He was known as “Baba Amte in the IAF.”
He has been associated with a number of philanthropic organizations and charitable Trust such as Servants of the People Society, Lok Sevak Sangh, Transparency International India, Air Force Association, Association of Senior Citizens in Education, Jasbaghti Charitable Society. He is also member of the managing committee of a few schools.
He was awarded Teacher’s Day award by Freelance Journalist Association & Chirag Foundation for his valuable contribution in the field of education in 2002. His beliefs are Good education is one, which nurturers and prepares children to face challenges of life boldly and become righteous GOOD HUMAN BEINGS.

Smt. VANDANA BABERWAL, at present is PRINCIPAL-MORNING SHIFT and has been looking after the Administration, Academics, Education and Training of children in an Inclusive Environment.

She is M.A. (English) and B.Ed.   She is working in this school since July, 2001. She has strong, cordial and specially bonding relation with fellow teachers and staff members.  She has got very high appreciation and respect from students and parents.

She is the FOUNDER PRINCIPAL of the Second Shift (w.e.f. April 1, 2011) of Balvantray Mehta Vidya Bhawan-ASMA which is the First Private Unaided School of Delhi to commence the Second Shift with the approval of the Directorate of Education, Govt. of NCT of Delhi.

She has been successfully implementing the Scheme of Inclusive Education in the School. She has been trained in Dousa-Hou Therapy (A Psycho Rehabilitation Technique for the Cerebral Palsy Children and Children with other Special Needs) from The Japanese Association of Psychological Rehabilitation, Chikushi University for Women, Japan to deal with the psychological needs of the CWSN.

She has given 100% board results. Students are excelling in various co-curricular activities at intra, inter school, zonal, district, state and national levels. She was the recipient of the Appreciation Letter from Smt. Smriti Zubin Irani, Former Minister – HRD, Govt. of India for the stellar performance of the students in class XII Board Examination in 2014.

She has been instrumental for addition of new facilities and upgradation of existing facilities for the benefit of the students from other charitable organizations like Rotary Club, Inner Wheel Club of Delhi Mid Town, Lions Club etc.  She has been awarded by Bharat Vikas Parishad (three times) for her excellent contribution in the field of welfare, education and training of the Second Shift students in an Inclusive Set up.

She has been the key member of various Committees in order to decentralize administration. She has formed a number of clubs to encourage co-curricular activities in the school and promote cultural exchange with other countries and in-service training of the teachers.  She regularly monitors the class room teaching of the various subjects and activity teachers from class Nursery to XII and Vocational Training Centre / IT Centre.

She has been responsible to provide Concurrent Training to the B. Ed. students of KIRAS and Amity Institute of Education of GGSIP University. She is one of the members of the School Selection Board and DPC for selection of teachers/staff and their promotion. She was invited by the Delhi Police as a Selection Board Member for appointment of Teachers in their schools.

Smt. Geetam Mallick, is one of the founder members of the staff. She joined this school as Counsellor/ School Social Worker in 1982 at Lajpat Bhawan. She did her Masters in Social Work from Jamia Milia Islamia University, New Delhi. Since her appointment she has been playing a key role in the functioning of Special Wing. Her prime assignment has been to assess the special need children and counsel their parents. She counsels special need children and their parents, teachers regularly to control their behaviour problems. She is also instrumental in the rehabilitation of special need children. She was also given the additional assignments of Administrative Officer of the school in 2009. She also liaises with various agencies regarding grant and other important tasks. She ensures the implementation and smooth functioning of inclusive education system. Under her able guidance and motivation special wing has been doing well on all the fronts. Our School has the rare honour of being graded a ‘Model School’ by the Ministry of HRD in the field of Integrated/Inclusive Education and to achieve this unique honour her contribution has been praiseworthy. She has been leading the team of special educators/professionals with a motto to provide the best facilities to special need children.
She has organized and conducted a number of Workshops/Orientation Programmes on various subjects specially on ELT/Value Education/ Inclusive Education and Community Development.

Name of the Grievance/redressal officer with e-mail, Ph No. :